I've come back from the baby shower feeling slight confused... I now know what the protocol for a New Age-y, Steiner-y baby shower celebration is, and it's not all about presents (which is nice). The event took place in a park known locally as 'The Spider Park' because it used to have lots of big hairy spiders in it. Now, I'm thankful to say, there are no obvious spiders, a nice play area and lots of grass on which were rugs and huge floor cushions beneath a rainbow-coloured 'tent' slung between some trees.

There were five of us there, including the soon-to-be-a-mother-again, Kerstin. It turns out we were there to celebrate motherhood, a sense of community, the special bond between us and the sacredness of the coming of a new life into the world. This entailed all being tied together with a string around our wrists which was then cut, and then we all lit candles from Kerstin's candle and gave her small gifts of crystals (smoky quartz and rose quartz from the others) and the abalone shell and the book from me. The symbolic string and the candles celebrate our connectedness: once Kerstin goes into labour her partner is going to text one of the group, who will then text the rest of us, so that we can light our own candles and think good things for Kerstin, and we'll only take off the strings when her baby is born. 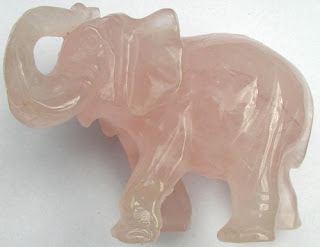 No-one gave an elephant, but it was such a perfect image - and copyright free!


Now I know there will be some people reading this and muttering, "Oh for goodness sake..." at the pseudo-pagan, New Age-y crystal-wavingness of it all, but despite my aversion to crystals, my ignorance of 'the sisterhood of women' and my general cynicism I found myself very moved. A group of friends came together to celebrate the fact that one of them is going to be a mother again. It wasn't done in a spirit of misty-eyed perfectionism but with the realism of us all having been through the iniquities and indignities of pregnancy and birth before. We weren't talking about impossible ideals for pain-free, intervention-free birth but about the difficulties we all experienced, the embarrassments, the ignorance, the finding things out the hard way and the acknowledgement that having other women around with whom to talk about these things makes it all more bearable.

The whole delicious ambiance we created, sitting under the trees in the sunshine, shaded by the funny tent strung up under the trees, eating food we'd brought and talking made me feel quite emotional I'll have you know. It's a million miles away from my own experience of giving birth: no pre-natal classes, no ante-natal classes, a midwife who hated me, nine months of morning sickness, a doctor who thought I 'seemed depressed' about becoming a mother, the difficulties of talking to anyone about it as no-one else in my family had children and my best friend was unable to have children, spending the last few months on crutches or in a wheelchair and then my mother dying four weeks before I gave birth in an inner-city maternity unit that specialised in drug-addict, alcoholic and HIV mothers... I am aware of the huge irony in the fact that the closest I got to the company and strength of other women during a milestone in my life was the compassion shown to me by the Hyster Sisters in the United States who as well as being a source of knowledge and wisdom as I drew closer to having a hysterectomy also sent me flowers, emails and texts when I had the operation - despite the fact I never met any of them.

So never mind whether you think a lump of rhombohedral silicon-oxygen tetrahedra SiO4 'carries the heart vibration' or can convey healing powers, I think the value of today was in the friendship offered at a key point in someone's life: a gift freely given and gratefully received, and I didn't feel stupid in giving it.
Posted by Sara Bowen at 2:27 pm

So was the aim to scare her witless with your tales of woe?!! And did she appreciate the book?

I've thought about your experience several times and even relayed it to my sweety. I am generally what I consder to be "oooohm-y", but I like those sorts of people. That honest connection to the real parts of being human appeal to me. I think I would have enjoyed that shower.