You'd think I would know better than to go away, wouldn't you? Either the action happens while I'm away or waits until I've just got back...

This time I've been up in Lismore on a residency at SCU for a week and a bit, and my dearly beloved husband and daughter found not one but three snakes while I was away. Number one is our friend the 2 metre long carpet python which provided the adults with entertainment at Darling Daughter's birthday party recently. He can now be found regularly sunning himself stretched out on a log near the pool, and he slithers around every once in a while, to keep us on our toes. 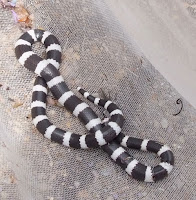 This little fellow is only very mildly venemous and is called a Bandy-Bandy snake, for obvious reasons


Our daughter had invited a friend around to play in the pool, but this little friend was already in there. Michael fished it out with the pool net and was kind enough to toss it into the paddock rather than smacking it with the flat of a shovel which is his first instinct! The Bandy-Bandy snake lives exclusively on blind snakes, which feed mainly on termites so I guess its presence around the house is suggestive of there being termites - which doesn't surprise me as I've found them in the vegetable garden. It's not good news for our landlord, however.

The third visitor wasn't so lucky, I'm afraid. red-bellied black snakes are venemous and we found one last night around the pool. It was only a juvenile, but it was rapidly despatched to slither around whichever is the afterlife for hapless snakes...
Posted by Sara Bowen at 10:12 pm