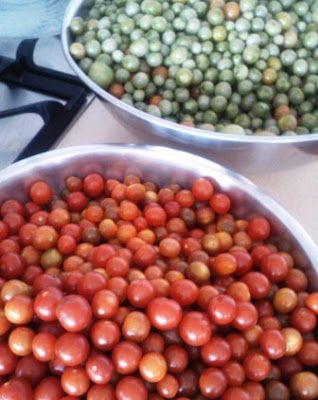 What to do when you have a glut of tomatoes? The correct answer is "make chutney"! So far this summer we've had around 20kg of cherry tomatoes from vines that appeared spontaneously in our vegetable garden from seed that must have been in the compost we used, or came via birds from elsewhere. Believe me, I'm not complaining! I do love making jams, chutneys and pickles so dearest husband and I have had the big jam kettle on the go rather a lot recently. Our store of carefully hoarded and recycled glass jars has diminished to such an extent that I had to go to the Op Shop to buy more, and only the urgency of pickling another 3kg of tomatoes before they went off made me enter the Life House Church's Op Shop in Coffs Harbour... Since I dislike that church and its religious fundamentalism intensely I am still feeling torn about giving them my $2.60 for glass jars. Will my money faciliate more of their brand of fundamentalism? Hopefully only a little bit: I really was quite desperate!

To assuage my guilt I'm going to share my recipe (well actually my mother's recipe, although she used 'big' tomatoes and had it all worked out in Imperial weights rather than metric):

3kg green tomatoes (whole if they're cherry tomatoes, sliced if they're big tomatoes)
25gm salt
2 large onions, finely diced
4 green apples, peeled, cored and diced
600gm dark brown sugar
600gm dried fruit (I use Australian sultanas which are like the English raisins I used in the UK)600ml malt vinegar
pickling spice - tie it into a piece of muslin/cheesecloth/clean Chux and tie it onto the handle of the pot!

The night before you want to cook the chutney, combine the onions and tomatoes in a non-reactive bowl and sprinkle them with salt. The next day, rinse them off and put them in a big non-reactive pan with all the other ingredients. Bring to the boil slowly and ensure all the sugar has dissolved, then increase the temperature and boil fairly quickly until the mixture has cooked down and turned a lovely chutney-brown colour. Bottle in sterilised glass jars while still hot (fill until almost at the top of each pot, and stir with a skewer to make sure there are no air bubbles trapped further down in the jar), top with a wax disc, and cover. Because chutneys and pickles contain vinegar it isn't a good idea to use a metal jam jar lid because it will corrode, so stick to cellaphane discs to cover the pots. Store in a cool dark place, refrigerate after opening and - if you can bear it! - wait a month or two before opening the first pot as this gives the flavours time to develop.
Posted by Sara Bowen at 4:03 pm

Never liked the stuff as a kid, but find I quite like it now. Of course, you can't get malt vinegar over here, but luckily there are many different options (apple / cider vinegar is the most popular in this area because it is such a huge crop round here). I made a vanilla apple chutney before Christmas - delicious especially with black pudding and pâtés.

I reckon if you have a glut of (insert fruit/vegetable here) the answer is chutney!

not re: chutney, saw your query at book arts list serv and thought...i know that name! then i came back over and sure enough!