Recently I went to the local Tender Centre and placed a successful bid for a box of tatty books. For those of you unfamiliar with Tender Centres, they're places where people send unwanted items for a silent auction: you turn up on the viewing days, arm yourself with a clipboard and a bidding form, fill in your contact details and make an offer against the lot numbers. On the Sunday evening you get an email that directs you to look on-line at your account and see if you were successful, unsuccessful or able to negotiate with the vendor.

A couple of weekends ago we went along and placed several bids, won a few, failed on three, and came away with the above-mentioned box of books, which was cleverly disguised amongst the bric-a-brac by being placed in between a box of decaying encyclopedias (encyclopedii?) and a LARGE box of evangelical tomes on Christian marriage (you know what I think about evangelical Christianity). We also bid successfully for a box of fossilised wood, a pair of hedge clippers and a sander. I could have been forgiven for failing to notice the books, I feel, but I'm glad I didn't. 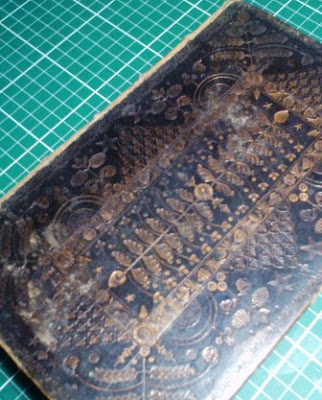 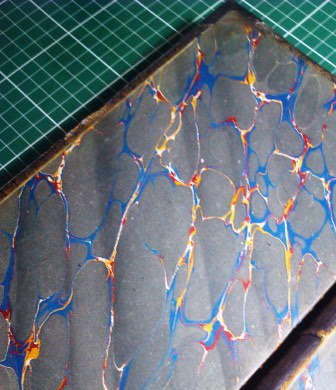 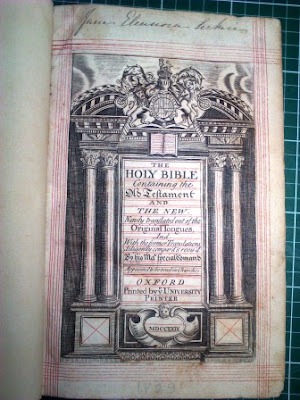 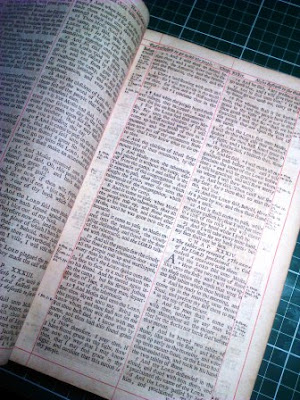 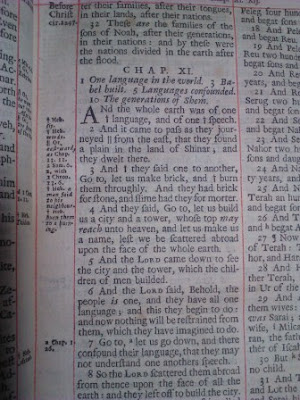 In amongst the beautiful covers of "With Nelson in Command" by Robert Leighton ("A Story of the Battle of the Baltic"), a volume of Churchill's early life and two volumes of "An Historian's History of the World" (1889) was a battered book block with a black covers... which turned out to be a 1729 King James Bible. 1729! That's older than the history of white settlement in Australia. I'll have to show you the Nelson book in a future post: it's hilarious, but right now I'm most excited about the bible, not least because I'm dyslexic with numbers (if you see what I mean) and initially read the date of publication as 1792 before I realised I was out by 63 years!

To be honest with you, I'm not sure what to do with it. You can see the beautiful front cover, but the back cover is missing. The spine is fused to the book block and I know NOTHING about 18th century bindings so I'm not sure how it is constructed or how to dissect it - if I had the courage to dissect it, which I don't. I'm not even sure if the cover is thin leather on board or embossed paper on board, although I do know that the hand marbled end-papers (front only, sadly) are exquisite. The book block itself is in extraordinarily good condition, especially considering the humid conditions of sub-tropical New South Wales! As well as the Old and New Testaments there is also a Psalter at the end of the book and I must look and see what the front page of the Psalter says.

Had I not bid successfully for the box, I wonder what would have happened to the books? The Tender Centre system allows items to be shown for two consecutive sales, after which they are returned to the vendor if not sold. I find it hard to understand that the vendor didn't realise the value of the box: the other books are probably worth $100 or so each, to the right purchaser of course. In a new country it is thrilling to hold in one's hand a book that pre-dates 'modern' (i.e. 'white') Australia. How amazing to hold something that is almost 300 years old! I can't wait to show it to the kids in my daughter's class - and I can't wait to find out more about the bible itself, if that's possible. How did it end up in a sale room in Coffs Harbour? Almost 300 years ago it was printed in Oxford, England... it's obviously had a heck of a life since then.
Posted by Sara Bowen at 6:09 pm

i bet the paper is wonderful. you've got a treasure, for sure! maybe several! i often wonder about the treasures that go to the sales after being loved and used and treasures, perhaps for generations.

I'd have a word with Carol(Barnacle Goose) as she has some contacts in the game.

Wonderful cover, which looks to me like leather with all that great gold tooling. Pity it has lost its back board along the way. Sounds as though it's a tight back, where the leather spine is very firmly attached to the text block. It is possible to remove this but very difficult to get it off without damage.
After seeing how you dealt with the Italian book I feel you could work on it yourself but you may just prefer to make a clam shell box to keep it safe forever.
Having it professionally restored or conserved is expensive to say the least.
I LOVE our local Tender Centre, but usually spend far more than I'd planned. Books, tools and rusty stuff are my downfall.

What amazing purchases. I love those sorts of books on my shelves. I usually buy them with the intent of using them in some sort of crafty way, then I end up just loving to look at them.