A huge thank you to the 200 or so people who came along to Coffs Harbour Regional Gallery last night for the opening of our shows. John van der Kolk was in the main space, I was in Gallery 2, and there was a group exhibition in between. My dearest husband, who isn't biased in any way, tells me that the most excitement in the gallery was in my space - and I think he might have been right, if only because what I was showing isn't what anyone would have been expecting! 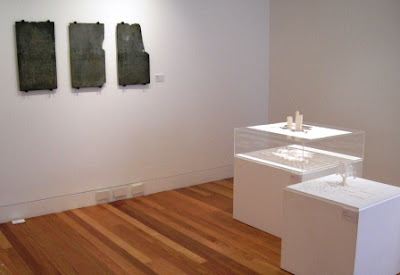 This is not a great shot of part of Gallery 2, showing my slates on the wall and two of the cut paper works 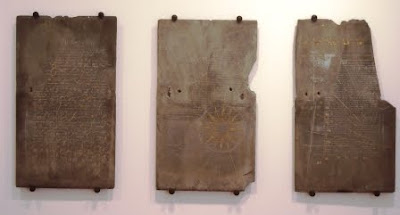 These are the slates: three roofing slates, cut into shape about 150 years ago, then screen printed and incised and gold leaf applied by me 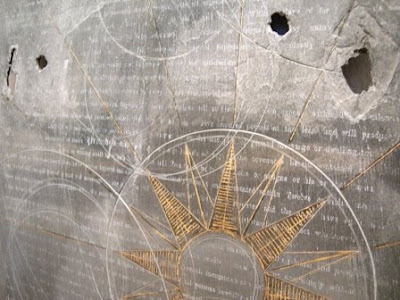 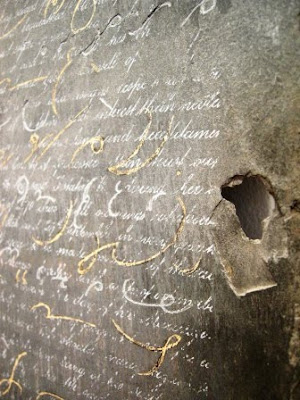 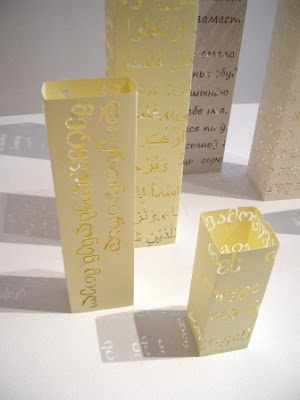 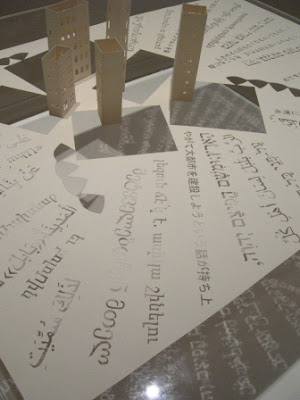 Communication Breakdown (crappy title but I was feeling desperate!), all cut from a single sheet of paper 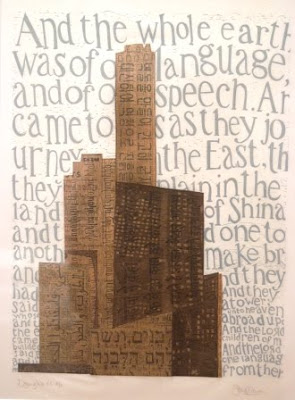 
I had such a fun evening: lots of friends turned up to support me; Deb Wall did a fantastic job of installing the show, making me feel better along the way, AND introducing my work; and people bought stuff! I sold four out of five pieces that were for sale, and received a universal kicking for pricing everything too low. I need to learn a lesson from that, once the euphoria's died down.

This exhibition has been a long and very personal journey for me in many ways. I can't believe how crazily (naively) ambitious I was in saying blithely that I'd produce an entirely new body of work for this show! Madness, frankly, and it brought me as close as I've ever come to throwing it all in, phoning up Deb and confessing that I'd bitten off much, much more than I could chew. I've learned, though, that I am surrounded by supportive, insightful and intelligent friends and family who have been nothing but encouraging, even though I've been a complete whingy pain in the arse. Thanks indeed to my immediate family and to my friends, who've cajoled me into the studio and ignored my stupidity along the way. In one sense I was right, though: by carelessly saying I'd start a new body of work I did indeed kick-start a new body of work! It worked! What I've got on exhibition at Coffs Harbour Regional Gallery represents a lot of effort but is the tip of an iceberg of work that could easily absorb me for another ten years, which is both daunting and satisfying at the same time.

I've also learned the hard way that I need to have more confidence in what I do and INCREASE MY PRICES! I think every single person I spoke to yesterday evening said exactly the same thing... which would have been depressing except that I didn't think anyone would want to buy anything! When I took the work into the gallery I marked it all "NFS" and only had a last minute change of heart, which resulted in a somewhat diffident pricing strategy, but never mind.

The biggest lesson, though, is probably that I need to keep on doing what I'm doing, week in and week out, so that I DO accumulate a considered body of work over time, in whatever form it takes. Then I will have something ready to exhibit when an opportunity arises, or something to sell when someone is interested, instead of scrabbling around to find something because I don't expect anyone to ask. That's a very different attitude, which I will have to find a way to cultivate. After all, if I don't take myself seriously as an artist, why should anyone else?
Posted by Sara Bowen at 8:26 pm

Congratulations on what sounds like a very successful evening.

But GET A GRIP GIRL ... you marked everything 'not for sale'???? That is completely bonkers and - for me -totally unfathomable. I get the insecurity about what you produce and whether others will like it - but if you're happy enough to exhibit it, then you should be expecting to be able to sell it.

Congratulations Sara! Well done! What an impressive effort.
This looks as if it is a very beautiful show indeed. I seem to remember some past work by you on slate tiles? Please, please, please tell me that you will post some lovely big photos of the works when the excitement has died down a little?!
Till then, CELEBRATE!

i just went whizzing past coffs (did you feel the presence) and i'm currnently sucking down a beverage in grafton.... it's a long drive but the end is in sight..... kinda like the process you've been through (yeah right!)

so this is a hurried note of

when i'm home again on my 'puter i'll try to type something more worthy - gosh your work looks wonderful!

Sara,
What a stunning body of work. The new direction is a winner so get out there and SELL it with confidence. I would covet one of those slate panels!!! Congratulations on a successful show. Lesley.

Congratulations Sara - what an amazing body of work, I wish we were closer or heading your way, but we are down south. They look as if they work together beautifully, despite the different mediums, and have a lovely connected story to tell. I hope you get to enjoy it all a bit now, relax and enjoy.