Yes I know, I've been very quiet of late. There have been all sorts of reasons: my email software was playing up, dearest husband and darling daughter were away on the school camp, I haven't been at my desk much recently... but in fact the real excuse is that I've been busy doing other things! And primarily the 'other thing' has been getting my studio sufficiently organised that I could - in theory - do some work. Willis came round a week or so ago and had a bit of a nag but in the process dropped me a wise hint: don't get studio block, he said but of course it was too late... I realised I was afraid of getting started, afraid of really getting stuck into some work, afraid I'll be rubbish and everything that comes out of my studio will be rubbish. But eventually I bored myself, realised that half the reason I wasn't doing anything was because a) I was tired and b) it was hard to resolve where to put anything when my poor printing bench was in such a state after being used as a kitchen for eight months! So the first job was to strip the poor thing down, sand it, prime it and paint it. Then I could put stuff on it, unpack some boxes and get going. So I did.

And this is the result: still no press in there yet, no wall taps for the paper bath, and the acid bath is still in the shed. But it's a start.

It's been a dream for the last few years to have a work table that I can walk around. Et voila! There's even the beginnings of a print: a collagraph plate of one of the bronze horses in St Mark's Square in Venice that I've been working on for an unmentionable amount of time, primarily because I haven't been sure what I wanted to do with it. Now I do know what I want to do but it involves carborundum grit and damn it if I haven't lost the stuff... 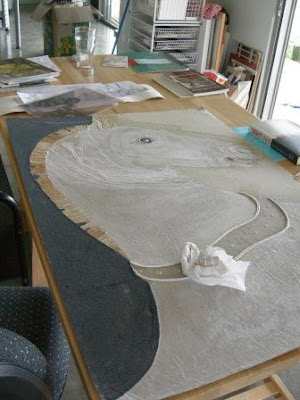 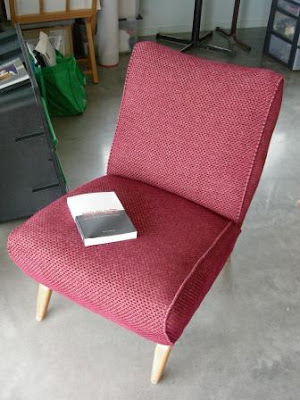 This is my reading chair. For years and years I've dreamed of a place to sit and read arty books in my arty studio. Et voila! This is a 1950s nursing chair bought by my mother to nurse me, years and years ago, but I've recovered it in a natty raspberry pink tweed (of which she would have thoroughly approved!) and it's sitting in my studio, facing the view with a suitably arty book on the seat that I've already started reading. 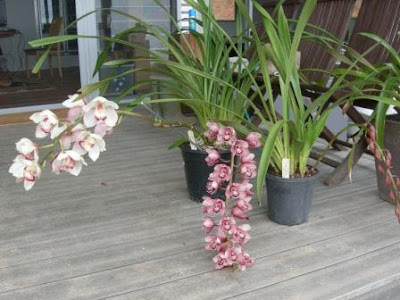 Meanwhile, back in the real world... lovely orchids flowering on our verandah!
Posted by Sara Bowen at 9:43 pm

W0w - the chair is unrecognisable - very nice!! A definite improvement on that gold / brown cover that I last remember it having!

And well done on getting the studio organised enough to start work.

Wow Sara, not only are you a printmaker but you're an upholsterer as well! The studio looks great and the collagraph print looks like it will be a stunner. I have never worked in such a large scale but it looks spot on for the subject matter you've chosen. Can't wait to see this print realised. Please show it when it's proofed! Lesley

OMG - your studio is stupendous! I love the raspberry chair and all the space

only question I've got is - when can I move in (hee hee hee) my rustic shed - come- studio is such a cluttered shambles I look inside and run away!

hope you have load of creative fun in your new space

Oh that looks fantastic! I'm so desperate to sort out my own space, and I see you have the same priorities as me - the work table and the reading chair. I hope you find the space relaxing and inspiring, and it quickly becomes your haven. That print looks amazing - and BIG! Good luck with it!