Guess what I was doing on Tuesday evening? That's right: I was out on the veranda at about 9:00pm, fiddling with my (old) little digital camera, taking photos of the lightning storm out to sea. I don't have anything flashy, certainly nothing which will take consecutive shots in the dark. This photo was a fluke: I had the camera balanced on the edge of our outdoor table and the exposure time was 2 seconds. Luckily the lightning flashed right at the end of the two seconds. 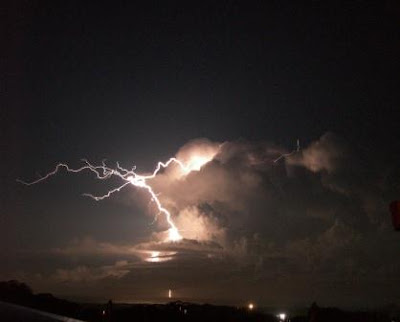 I forgot to tell you that I spent a very nice day with our friend Elsbeth last week, sneaking off to Grafton while dearest husband and darling daughter were away together on the class camp.

There are two routes up to Grafton (pronounced "Gra-a-a-fton", apparently, not "Graff - ton" as I usually say it): one up the Pacific Highway - yuk - and one up the back roads through Coramba, Nana Glen and Glenreagh. This route is MUCH nicer: leafy greeness and straight roads through the hills, so off we toddled after a quick trip into town for money and petrol.

Every year Grafton hosts the Jacaranda festival, a couple of weeks in October when the many Jacaranda trees are in bloom and the town is a sea of mauve petals. It's a bit like the Japanese Cherry Blossom festivals but purple. We were slightly in advance of that but managed a visit to the second hand bookstore and the art shop in South Grafton before arriving at the Regional Gallery for lunch and a look around. Lunch at Grafton Regional Gallery is usually a good bet: Georgie's Cafe Restaurant is in the courtyard and although a shower of rain forced us under the veranda we had half an hour at a central table smelling the jasmine and admiring the gardens as we ordered.

There were various exhibitions to see but we focused on two: "Prints from Jilamara" and "Form, Fire and Fruition", an exhibition of ceramics by Geoff Crispin. I'd never heard of Jilamara but apparently it is an arts and crafts association of Tiwi artists on Melville Island, north of Darwin. Being a printmaker I was rather fascinated and spent a good hour walking round and dissecting the prints! There were various techniques in evidence but the ones I loved were geometric images using two colour plates and chine colle. The resulting pictures were quite subtle and deceptively simple - like and yet unlike mainland Aboriginal art. Yes, some of the pictures used dots and the colours were sometimes redolent of the ochres and earth tones I'm familiar with, but there was a quite different feel. The printmaking was confident and sophisticated with a rhythmic, fluid energy moving within the constraints of the lines... I don't know that I'm making much sense of the imagery when I can't show you any pictures to help you interpret my words but it was a deeply satisfying show. I always wander around with a small moleskine notebook and a black ink pen, scribbling and drawing away, and I had a lot to look at in a short space of time. The ceramics were also interesting but I think I was more intrigued by the photos of Geoff Crispin building his own kilns than the work, which was great, but I was just fascinated by the DIY approach to it all.

The other thing we was was a small room filled with prints for sale as a fundraiser for the Jacaranda Acquisitive Drawing Award, which is an annual event. If you click on the link it takes you to the 2010 entries and you can fossick around among the weird and the wonderful. I love this award which might seem strange when drawing apparently plays so little part in my practice, but it is there, honest! You just don't get to see it. I should really do more drawing and part of the fantasy of my studio (apart from bookshelves heavy with interesting tomes to read, an empty table to work upon and my special chair with a view) is that I will conjure up the time and head-space to do more drawing. And about bloody time, frankly. Remember I said last time that Willis had rung me up to have a nag? Well the beggar rang me again today - whilst waiting to have an operation at the local hospital, would you believe - to nag, nag, nag all over again. Hmph.

Anyway, back to that room full of prints. I didn't even know it was there or why until Nigel Killalea, a local artist, rang me a few days beforehand to ask me if I was going to Grafton Regional Gallery that evening and if so, could I please give him a lift? I was clueless and had to look it up on the internet, and then felt slightly peeved that I hadn't been asked to contribute a print to the sale since I am a very local artist... This was in fact a question that I asked the woman who unlocked the room for us so that we could look at the remaining unsold prints! The answer was that they had me on their database (somehow) but hadn't identified me as a printmaker, didn't realise I was a professional artist and hadn't got me on their mailing list - despite me having met the gallery director professionally a couple of times, been to openings and, I'm sure, waved my business card around! Oh well. Just goes to show my public profile isn't yet quite as big as my slightly-put-out head... The woman I spoke to was very nice and I suspect that I might get a call when they next do a fundraiser.

The prints, meantime, were a very mixed bag. I love Christine Willcock's work, for example and there was an edition of a digital piece that I've seen before (not, sadly, one of her etchings on card - just HOW does she do them?), as well as people like Bernhardine Mueller, Gosia Wlodarczack and Rachel Newling. Also Alun Leach-Jones, but I'm afraid that despite his high profile I can't warm to his work. Oh well. It turned out that he had been teacher and mentor to the husband of the woman on the front desk so sadly my lack of enthusiasm was noted...

There you go. Enough blethering. I am going to phone the hospital and see if Willis is OK and then it's back to trying to sort out my daughter's holiday social life while quietly cursing all the mums who are playing hard-to-get while darling daughter mournfully plays in her room by herself. Not because she's unpopular, you understand, more because no-one seems to be able to get their heads together enough to arrange anything. Aaargh.
Posted by Sara Bowen at 1:06 pm

what a great photo!

and forgive me if you could hear my slight giggle at your pronunciation of graaaaaaf-ton..... I'd love for you to have a stab at some of the places down here (locals delight in folk mispronouncing tathra 'it's tarrrrr-thrarrrr can't you tell?!'... but usually I just like to drop this into the conversation - Quaama.....(go on - I dare you.... hee hee hee hee it doesn't take much to amuse us down here in the bush ..... ps the solution is - Kor-mar)

now that is the spirit and viewpoint I usually take with me when entering the local regional gallery..... so I suppose it won't come as a surprise for you to learn that I'm not 'known' by the local director either (despite pressing the flesh.... and being a part of 3 shows in the gallery in her short time at the helm....)

Cool photo! Shame you didn't get invited to contribute a print - I'm sure they won't be making that mistake again next year!

Sara,
That is a wonderful photo. Going to use it anywhere? Lovely link to the drawing awards. Have had a quick look and will do it in more depth later. At first glance I love the pieces by Kevin Oxley and Christine Willcocks. So many ideas and not enough time! Lesley

Great to hear all your news; fabulous photograph; and strange to hear how they somehow 'forgot' about you. Weird. Sounds like a great trip nonetheless.

What an amazing photo of lightning. Such luck! ....skill! jan

Yes it's a terrific photo - and I'm sure that any photographer worth his salt will admit there's a high proportion of luck in most types of photography.
Glad you enjoyed your trip to Graarrrrfton Gallery!

Fantastic photo Sara. I think I may be too much of a wimp to photograph lightning like this. I'm very scared of all the loud banging and flashing involved with thunderstorms.