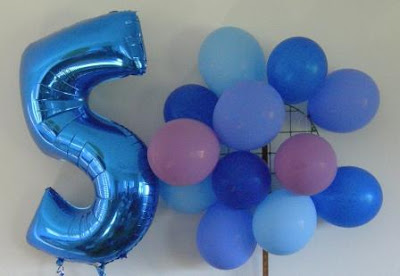 Not to most of you, obviously, but instead "Happy Birthday!" to my husband, who will be 50 tomorrow i.e. April 27th. He's the person who takes care of everyone else in the house/family/circle of friends/world and doesn't think a lot of himself, so it was a major miracle that we managed to spring a surprise party on him. He was persuaded to go out for a couple of hours so that I could 'do some work' (which was at least a potentially realistic excuse, given that I have a show opening in two weeks' time). In fact, I raced down to the shed, brought up extra chairs, tied balloons to the verandah supports, made a cheese plate and a fruit plate, put champagne in the freezer and beer in the fridge. Then I watched with some amusement as the weather rolled in, sudden violent winds ripped the balloons off the verandah supports and the special helium 'O' blew into the flight path of the nearest jet...

M's birthday weekend started with a lovely meal at the Pacific Bay Novotel with other friends, and then we had the surprise party here, so I think he's had a great time! It's been fun to pull the wool over his eyes (for a good reason only, you understand) because he's usually pretty sharp and, since we live and work together, it can be hard to keep anything much a secret. All in all I'm now rather tired (no, alcohol is not to blame as I was designated driver on Saturday and too busy organising things yesterday. So there).
Posted by Sara Bowen at 9:32 pm

Happy (belated) birthday to the DH.
The Man gets another candle on Sunday. Hmmm...what can I come up with? Apart from the exotic plant currently hidden in Ali's greenhouse!