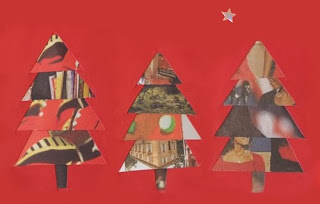 Thank you to everyone who has stopped by for a read and a chat over the last year. I've had fun posting about 2008 and I'm looking forward to blogging again in 2009.
My friend Jan over at 'In My Spare Time' gave me a task list for the Christmas period that includes instructions to enjoy myself, eat too much and drink too much, and of course I'm far to scared of her wrath to disobey... (just in case you're reading this, Jan!). I'm hoping to add some extra fun into the mix with 'making things' with my Darling Daughter over the long school holidays, some reading for that fabled PhD of mine that is about to start, and a two-week residency with Tim Mosely up at SCU in Lismore at the end of January. So much to look forward to, so little time! And in the brief periods between all the fun activities I'm going to have a good think about a couple of ideas for prints that are brewing away in my subconscious because if we have to move at the end of January (a distinct possibility) I may not have access to my printmaking equipment for a while after that.
Have yourselves a very Merry Christmas and all good wishes for a happy New Year, and I look forward to catching up with you soon,
Sara x
PS. In case you're wondering about the card, it's very simple: strips of paper are pushed through slits in the card. The paper this year is mostly taken from various newspaper coverage of Barak Obama's election to the US presidency and varies from headline quotations in various scripts to strips cut from pictures of the First Lady-elect's acceptance event outfit! The election raised some interesting (well to me, anyway) parallels with traditional Western hopes and fears in the Christmas season: you know, all the old chestnuts about new beginnings, the 'choosing' of a 'saviour', etc, etc. Obama's election has echoes for me of the elections of Tony Blair in the UK after years of Conservative government and all that brought with it, and also of the election of Kevin Rudd to the Federal leadership of Australia just over a year ago. Again and again we pin our hopes on individuals to make a real difference in the world; I wonder what a new year will bring for them as well as for us. When I ran out of election coverage I cut out glossy bits from tasteful 'special offers' I can't afford, like luxury tours of French chateaux and a gourmet's tour of London. Hence the festive uniforms of the Horse Guards on parade!
Posted by Sara Bowen at 9:55 am

Merry Christmas to you too! See you in the new year!