I can't believe it's taken me so long to post this up - I uploaded the photographs several MONTHS ago, but forgot about writing any words! Luckily I did make notes, as I always do, in my trusty Moleskine notebook that I always carry in my bag, but I suspect that unlike the entry about Venice there will be more pictures than text this time. 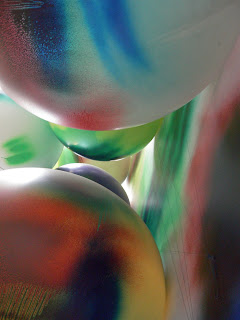 
Katherina Grosse is, according to the blurb accompanying the exhibition, one of the most exciting and innovative abstract painters working today. Painting with a spray gun, Grosse works in situ, responding to a space’s architecture and ambience by working directly on the walls, floor and ceiling. Having exhibited widely through the United States and Europe, ‘Picture Park’ is Grosse’s first major solo museum project in Australia. The artist has transformed GoMA’s long gallery into an extraordinary environment that confounds conventions of museum display and challenges our expectations of painting'. And I guess that's true. 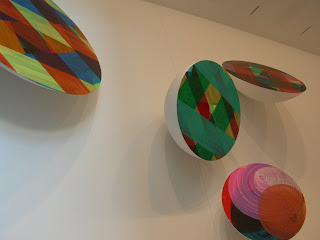 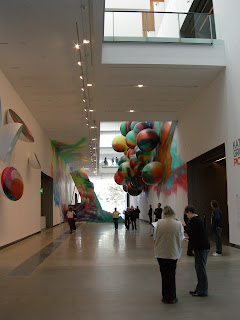 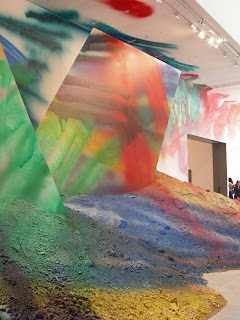 I was very interested in the use of space, and it was useful to contrast the way in which artists use the vast interior of Tate Modern at the Bankside Powerstation... This space, while impressive, is a less coherent structure and the art is more intimate as a result.

I don't know that I really responded that well to the installation. As a whole, viewed from a distance, it looked impressive, but close-up I found it fragmented and incomprehensible. It must have been a lot of fun to do, and I don't think I under-estimate the amount of work and thought that went into it, but I'm not sure what I took away with me apart from impressions of spray-painted surfaces. In particular the gravelly substrate piled up on the floors was disappointing when viewed close-up. It looked scraggy, dirty, disintegrating, and it was interesting listening to a staff-member commenting about how eventually the weight of the spray paint on the loose surface of the gravel causes it to slide downwards, so the exhibit eventually collapses. Is this a deliberate reference to entropy? I've found other explorations of decay more compelling. 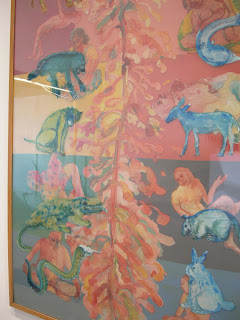 Nalini Malani, detail from Sita
A Mylar panels painted from the back using acrylic and watercolour paints and enamel 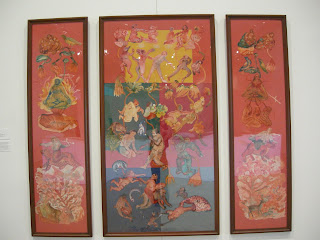 The Ecstacy of Radha
Mylar panels, acrylic and watercolour paints and enamel

I was interested in Malani's technique, because painting from the back of your matrix can't be easy... How do you know what you're painting? Do you use a mirror? Or do you work awkwardly from the front...? Intriguing! 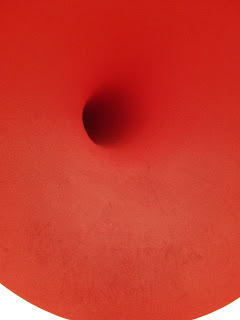 Oooh I've always loved Anish Kapoor's work. I don't know whether he's become a bit pretentious with age, money and reputation, but there's something very compelling about his pieces that gets me almost every time. I'm sure some of the attraction is to do with the surfaces he creates - I love a good surface and it's a preoccupation in my own work - and some of it is to do with beguiling simplicity of form and the intensity of colour. When I see his work I experience a sensory 'shiver' of recognition and excitement. Sad, possibly, but true. 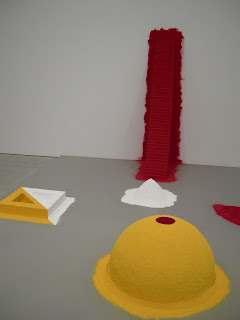 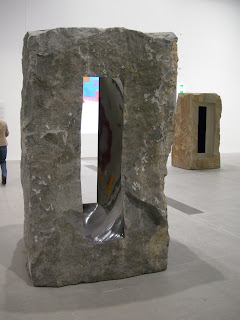 
Part of my engagement with Kapoor's work is that he is concerned with emptiness and intimacy, and their embodiment, and also that his work has a formal quality. They're very polite and quiet, Kapoor's sculptures. They don't scream at you, but talk quietly and if you listen, they draw you in. Further and further in, I find, until I want to touch them - a fact that severely disturbed the gallery attendant at GoMA! Of course I didn't actually try to touch the sculptures - I'm not that stupid - but he was disturbed by how much 'looking' I wanted to do, and also that I wanted to take photographs, even though gallery policy was that I could take non-flash photographs. I think he was used to bemused pedestrians who waited patiently to be allowed through the roped-off entrance to the small gallery in which Kapoor's works were displayed, and who trooped round and walked off again. Someone with a notebook, a pencil, a camera and an inquisitive nose wasn't really welcome and he made my time looking at the sculptures as tense as possible... so I somewhat bloody-mindedly stretched it out for as long as I could, and then came back for a second look with Ella! 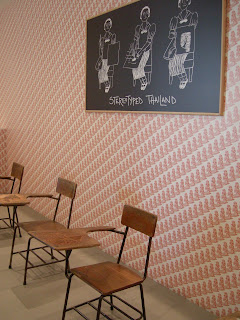 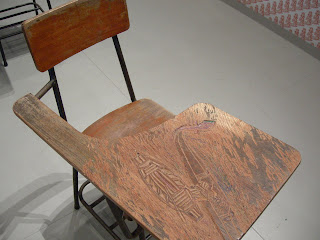 This was an intriguing exhibition consisting of wooden desks with Thai symbols and motifs carved onto them. The audience was invited to make rubbings of the carved desks using paper and wax crayons provided. I thought it was great, and so did the rest of the family. Ella had lots of fun making a number of rubbings, and even Michael and Patrick did one each. The idea was a questioning of the shorthand of images about Thailand that have become ubiquitous and trite: noble elephants, traditional costumes, pagodas etc, as a way of revisiting Thailand's culture and history. 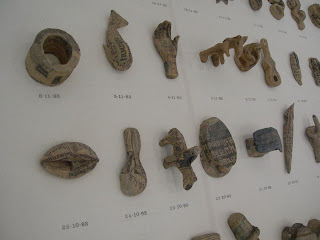 Fascinating stuff: Lertchairprasert read a newspaper every day for a year, selecting one story to make the subject of his art for that day. The remaining pages of the day's newspaper were pulped and used for papie mache which he used to make a hand-sized obejct relating to the 'problem' identified in the selected article. A year later he revisited each of the 365 objects and meditated, inscribing a 'solution' to the problem as it arose from his meditation on the back of each object. 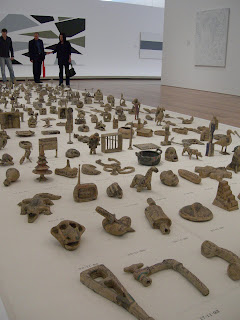 The resulting objects were displayed as a group, and reminded me of Robert Klippel. I really like the repetitive cycle of actions: reading, meditating and making a sculpture that are a part of Lertchaiprasert's practice. If only I was that disciplined myself... 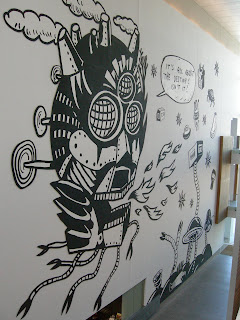 
I've got no idea what this means, but I thought I'd include the photo just because of the monumental height of the installation! It was begun before the Asia-Pacific Triennale, apparently with the help of local highschool students. Nugroho is described as being 'media-savvy' and 'politicised'. I'm really not sure what his work is about, but it is imposing. 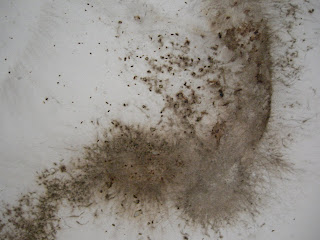 Dragon or Rainbow Serpent: a myth Glorified or Feared 1996 (detail)

This work was created for the Second Asia-Pacific Triennial in 1996. It refers to the Chinese mythological dragon which is associated with water and power, and thus has links with the Aboriginal Rainbow Serpent. 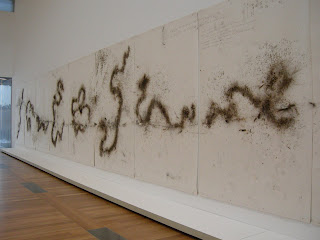 I first saw Guo-Qiang's work at the Arnolfini in Bristol, ages ago, and found his use of gunpowder to make drawings fascinating. The texture of the paper after the explosion has burnt it and deposited ash and singed marks is great! I also like the idea of what making the work must be like: dangerous, unpredictable, exciting and spontaneous... out of control. 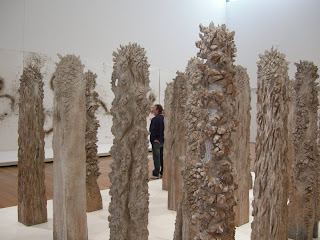 
The thirty pillars of wood arranged in Toya's work are dusted with ash and subtle applications of paint as a symbolic recreation of a forest lightly covered with snow. Most of the pillars are carved, some have split. It's slightly eery... 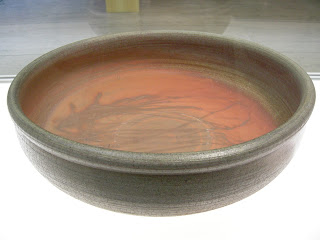 I put this in because there was a small exhibition of Australian ceramics as influenced by Japanese ceramics, and this wheel-thrown Richmond clay bowl, fired with black wattle in the Bizen technique, was big and beautiful. It was at once a perfect and an imperfect exhibition: perfectly sized and curated, and utterly inadequate in terms of documentation or information. But lovely, nonetheless. 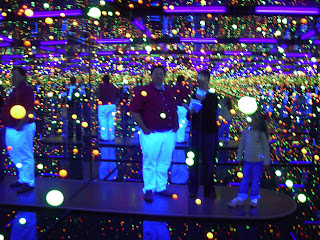 Yayoi Kusama
Soul under the Moon 2002


This was a wonderful installation: a small cabin within the gallery that looked for all the world like a lift from the outside, complete with sliding doors. But inside was a magical space with a walkway hovering over a still pool of water withing mirrored walls and ceiling, hung all around with illuminated spheres and gently lit. The space became infinite as the doors slide closed and you stared around you... up, down and all around. It was beautifully executed - gentle and magical, and very effective. We adults enjoyed it as much as Ella! 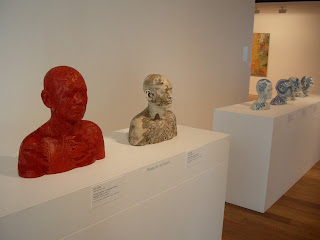 I've seen Ah Xian's work before, and marvelled at the intricacy of the sculptures which use all sorts of traditional Chinese manufacturing techniques - from jade carving to cloisonnee via painted ceramics - and imagery. I suppose the underlying concern is a re-casting of that immense history and knowledge in a contemporary idiom, but constrained in the human form. I find the resulting work very beautiful, and I accept with his work, as with many other artists such as Bridget Riley, whose work I love, that Ah Xian doesn't do all the work himself, but uses the skills of traditional craftsmen around China. This use of assistants doesn't bother me; for all those who say that if the artist doesn't make the whole work himself then it isn't really art, I challenge them to come up with the same visually and intellectually compelling ideas...
Posted by Sara Bowen at 12:13 pm