This weekend we finally went camping, to Boorkoom campsite just south of Minniewater, about an hour and a half north of Coffs Harbour. I know that thousands of families do this regularly and it isn't a big deal, but for us it was new territory, not least because we didn't have a tent until one of my brothers-in-law very kindly donated his old tent to us at Christmas. Thanks, Pete! He hasn't used it in a few years but it's a fairly modern design with light-weight poles. Darling daughter and I put it up on Monday afternoon, thinking it would be a good idea to have conquered the basics before setting up camp on Friday evening! We were right: the tent is very big and the instructions are very brief, so it was great to have worked out what goes where before we all fell apart on the night... 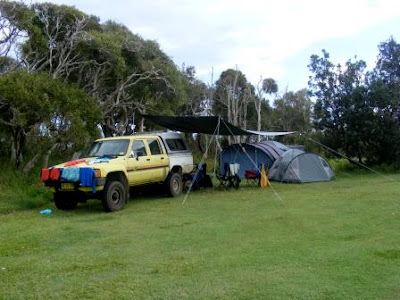 We went with very good friends of ours, Taja and Robin and the two girls and one of their friends so we had a total of 4 adults and 4 children which worked well. The campsite has a gas barbeque and a composting toilet; we brought small gas stoves and our own water. This is our Tent Mahal: it is ENORMOUS! The main tent would easily sleep four people, if not five or six, and then there is a separate room at the front with a net insert that darling daughter had all to herself as her bedroom. 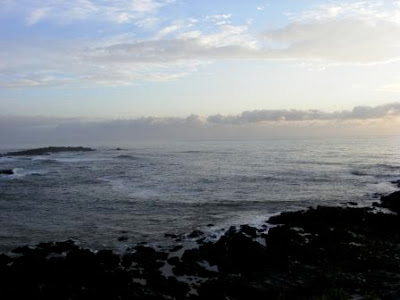 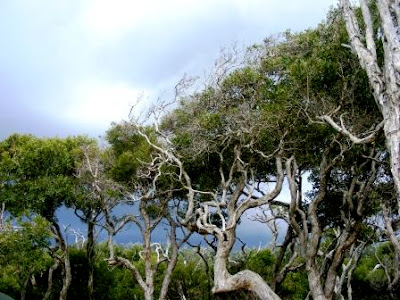 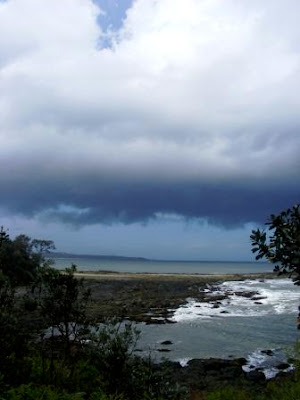 The whole experience was great - apart from the numerous insect species who bypassed Robin and Taja in order to feast on dearest husband and me. This is despite large quantities of insect repellent, so I don't have any idea what works! I am one large itch with dozens of bites, some big, some small and most in undesirable areas. Dearest husband is in a much WORSE way: his back is a large mass of lumps and bites including one very impressive wound the size of my little fingernail: I don't want to think too hard about what caused it! I hope we all stop itching soon, but meantime I will keep applying the haemorrhoid cream (the largest % of Lignocaine in an over-the-counter remedy, in case you're interested, and thus excellent for insect bites!).

Just in case you thought we had it easy I want to tell you that on Saturday morning the skies darkened, the wind howled, and the rain came down, just as Taja and I were out walking with the girls. Robin and my husband had stayed behind and luckily thought to put up a large tarpaulin for a shelter, but we bore the brunt of it on the beach and came home uniformly dripping, as was our tent. Sadly a few years in a bag has loosened all that lovely tape that keeps the seams waterproof, and much of it peeled off as the tent was being put up and taken down. We had thought ahead and taken a roll of plastic builders' film which we were able to place in between the tent and the fly, but only after we discovered how wet everything was! Luckily the weather after the storm was hot and by the time we packed up to come home everything was dry again; I didn't want to try drying off a huge tent in the car port in our current humid weather...

What was the bad weather doing while we began to dry off ? Why, the storm went south, of course, arriving in Coffs Harbour some time that afternoon:

When we got back we found trees down everywhere (you can imagine what our 1.5km dirt track looked like, wending its way through the woodland!), and a falling branch cracked one of our solar panels - although it is 1 out of 30 panels so we're still OK.

Hooray for camping! We need to buy our own big tarpaulin to put over the tent in case of rain, but otherwise we're older, wiser, more tanned and definitely bitten to pieces, but happy!
Posted by Sara Bowen at 10:32 pm

Take some OTC antihistamines as well for the insect bites - works really well. I should know - I am, sadly, a mozzie delicacy and have ended up in hospital as a result. And calamine lotion cools nicely.

Oh yes, anti-histamines are great: I actually pre-dosed myself in the knowledge I would get bitten! And there's a cream here with calamine lotion AND lignacaine, but I will still be a throbbing itch for the next few days... and with bites big and small I'm still not sure exactly which species bit me. Sand flies and mosquitos definitely, plus some ticks, an ant or two and what they call here "March flies" which look like a small version of a Vulcan bomber, but with a hypodermic needle for a nose.

keep an eye on some of the bites just in case one of them was from a nasty tick (a red 'bulls eye' around a tick bite site is an indication of lymes infected tick..... get thee to a dr pronto and DEMAND treatment for lymes no matter how unbelieving the dr might be) sorry - I'm self appointed lymes disease hit squad and i hate ticks with a vengeance (die tick die!!!!)