The way in which creativity seems to work in me is very circuitous. Occasionally I try to prevent my own worst excesses by doing a little bit of forward planning, and this is one such occasion. When I arrived in Coffs Harbour in October 2006 I visited the Nexus Gallery in Bellingen on one of our very early weekend drives around the local area, and when I found out that I too could exhibit there I put my name on the list. I was warned there was a long lead-time, and it wasn't until the second half of last year that I got a letter in the post (amazing that it found me, given how many times we've moved in the intervening period!) to notify me that my dates are 9th May to 4th June 2010.

No problem, thought I. BookArtObject was getting off the ground (I can't remember the exact timeline for that but if it hadn't actually started it certainly existed in my head) and I'd got a few other things I needed to finish off, plus I knew we'd be going overseas for several weeks, so I allowed myself some room and promised I'd start work at the end of the year. I hadn't banked on moving house again so my good intentions were hijacked and I haven't been able to start anything new until now. 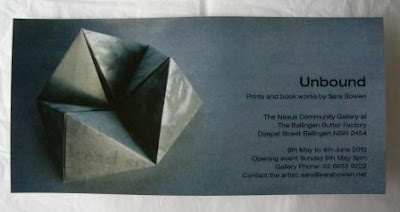 I've been jolted awake recently by a phone message left by the Gallery to tell me that they needed 350 invitations for a mail-out by the end of February and, as I didn't get the message until almost the end of February, I had to do a pretty fast turn-around! Luckily I have a fabulous friend called Anna who is a graphic designer and she took my photo and the details and transformed them into elegant invitations in only a couple of hours, so I was able to deliver the invitations in time. As I had 500 printed I also have enough to plant around town and deliver in person to my favourite people.

Meanwhile, a plan for work is slowly forming in my mind... I have lots of ideas to do with cut paper, and fortunately I do have a few pieces of work that haven't been shown anywhere near here and can legitimately go into the exhibition. I don't think I'm going to have much to sell, but I am hopeful of a good show! 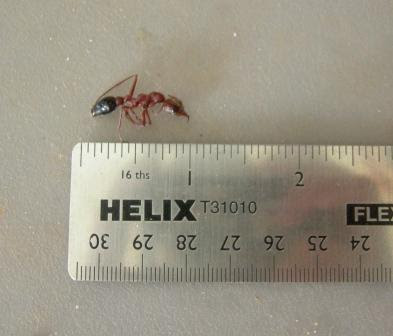 Mmmm... These ants are big, have BIG jaws, and jump!

While I've been cogitating we've been dealing with lots of mud. Recent rain plus the amazing activities of Pete and his digger mean that we are surrounded by thick, oozy clay, necessitating multiple pairs of shoes. I.e. shoes for wearing in the house are carefully carried up the hill while wearing shoes suitable for sticky mud, and I also have 'car' shoes for driving in. More pictures will be posted on my Lookout 31 blog in due course, once I've recovered some energy. I'm fighting hard against the beginnings of a cold, in the knowledge that half the parents at Darling Daughter's school have succumbed to what is a nasty 'flu-like bug and I DON'T WANT IT. Thank you.
Posted by Sara Bowen at 9:25 pm

You sound very organised despite all the pressures you're under Sarah. I hope you'll be posting some of your work towards the dates for the exhibition? I wish you every success with it! Lesley

the invitation looks divine - and I hope the show is a great success (by whatever manner you like to measure 'success'.... I'm not one who links sales with success....)

I trust the ant isn't going to the opening

and that your 'exhibition' shoes stay mud free

(wish I was in the area to attend..... ahhh dream on.... at least now after our rainy spell I can read about all the mud and not suffer from acute moisture jealousy!)

I admire your cool,Sara! Lots of luck, and watch out for those ants...

Sounds exciting Sara. I hope you are going to make a book about shoes sometime. You must be a very disciplined person - we can't even manage to take one pair off at the door around here. Happy making for your exhibition!

The invitation is really beautiful. It's always interesting to me when the things that cause the most stress, turn out the most lovely.