Still here, but not fully functional!

I just posted some amusing photographs of the before and the after in what will eventually be our office/studio, which is where we are temporarily living while the 'big' house is built. So much for the pristine state of things when we first arrived! But the main thing is that we have moved house, so the awful part of that process is over. No more packing, no more shifting furniture (for a while, at least) and no more cleaning up your former rental property so that you can see your face in the toilet lid. Hooray!

The only downside to moving into our office/studio building is that we are a little cramped. Now I have to confess to the fact that we own FAR too many things, so it's mostly our own fault. But sadly my 'studio' for the next few months is going to be in the 'garden store' room with a roller door, at the end of the building... We've bought a collapsible gazebo thing that we're going to erect over the garage door to give me some shade from the sun beating down onto the metal door and wall cladding in the morning, which will be a relief, and the gazebo will do double duty as it will also partly shade the inflatable swimming pool (12' across) that is part of darling daughter's birthday present. The wet-edge infinity pool will have to wait until our scheduled Lotto win later this year, I'm afraid. 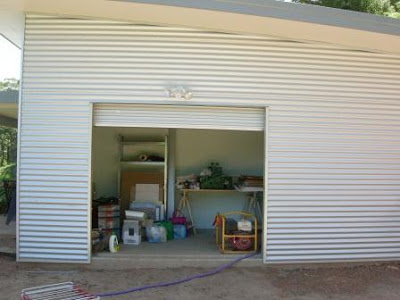 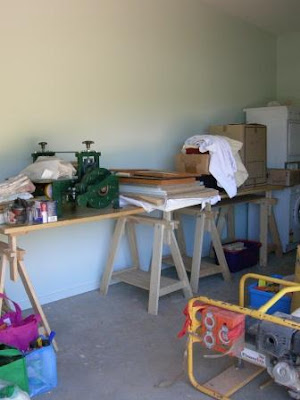 As you can see, my darling press is sharing the space with the washing machine AND one of the builder's diesel generators, which can't be helped. The purple pipe running out of the garden store room is the outflow for the washing machine (strangely you don't have a washing machine outflow plumbed into a garden store under normal circumstances so we're improvising), trailing across the sand out the front (base for the pool) and over the edge of the hill!

So far, so good. Only a few outbreaks of temper in the last two weeks, which I count as a blessing and a miracle all in one given the grim resignation with which we approached the task of moving house and the fact that dearest daughter had to endure the whole thing with us as all my cunning plans to entertain her elsewhere fell through... We're tired, frequently sweaty and totally over the whole process but we have survived relatively unscathed and that celebratory bottle of champagne we drank a few days ago went down very nicely, thank you.
Posted by Sara Bowen at 2:24 pm

Welcome to your condo-combo!(That could be a bossa nova band!)

May your hassles be but tiny, Sara.

Sounds like it's beginning to come together and the main thing is in place - not the washing machine - the press!! Once you get started on some prints the surroundings will be immaterial I expect. Good luck surviving in the ongoing building works. Lesley.

Congratulations on making it to your studio/home relatively unscathed. Nice to see your press ensconced on the bench, ready for you to get to work.

Yea for living in your dream home, such as it is right now. Yea for not living in a rental. Yea for being home!!! jan

Sara I haven't visited for ages and am sorry to see that you have some kind of rash "eeYuu" as (Lisa Simpson would say!!) Hope it clears up soon. Maybe it even has by now.

Brave of you to put a photo of it on your blog. I got my partner C. to photograph my stitches after my spinal surgery last July but it was too awful to post on my blog what with all the bruising and stuff.

Hearing you speak about moving house and studio and having all your stuff around the place in boxes reminds me of that horrible period I went through when I moved up to Scotland from London over 2 years ago.
It really was so frustrating BUT from that photo you posted on the blog - it seems your situation doesn't look quite so 'chock a block' with boxes as my garage (store) was. Hope you can get round to making some artwork soon.
take care

It was trying to remember where things were, in the carefully labeled boxes (most of them) that drove me batty !!