I didn't realise that my darling daughter thought that the following scenes of devastation were her fault until we got home from our European tour on Friday, when actually she is the heroine of the piece!

Can't remember what I've said before (jetlag is my excuse, as if I needed one) but the potted version goes like this: just before she and dearest hubby came out to join me in the UK, darling daughter was in her downstairs bedroom, watching with fascination as a large water-filled bubble appeared under the window... After Daddy had been summoned, who called the agent, who called the emergency plumber it was established that copper water pipes buried in the concrete floor of the upstairs bathroom had finally burst. 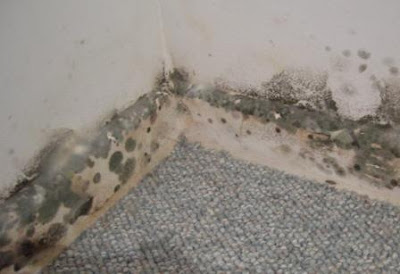 The escaping water did what it does and found various escape routes, mostly in between the waterproof membrane that covers the concrete floors and the lovely wooden floor boards laid on top, but some flowed into the cavity in the external walls and into her bedroom where it seeped everywhere, very quietly! 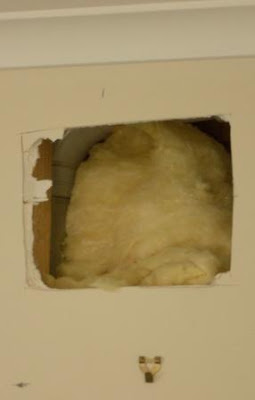 Prior to their departure they had to endure holes being cut in interior walls and drilled into the exterior walls, but it was only once they'd left that the full extent of the damage became apparent: every wooden floor in the house (and there are many!) will have to be replaced, and our en-suite bathroom has to be ripped out and replaced... 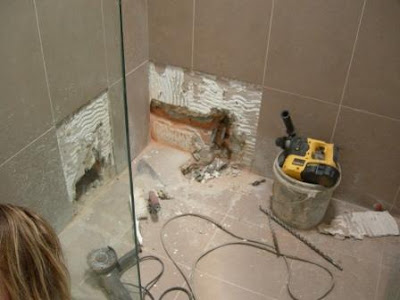 So when darling daughter and I landed in Coffs Harbour on Friday after over 30 hours travel back to Australia we went to a hotel for the weekend, and as of yesterday we are the less-than-impressed inhabitants of a slightly damp, roach-infested holiday "cottage" in Sawtell. Jim, the builder, assures me that we only have to endure it for 2 weeks. Fingers crossed; that would be great, but the landlord's agent rang me earlier to ask me to come in for a 'quiet chat' early next week and so I'm not entirely sure what's going on!
Posted by Sara Bowen at 5:03 pm

Poor kid. You forget how things just aren't that logical as a child. Fingers crossed that everything works out.

A "quiet chat"? What in the world does that mean?

Your poor little sweety. Thinking she caused the problem. = (

Yikes! this doesn't sound good, does it? At least it's not your own house, and at least by early next week you should be over your jetlag which should make things a bit easier. Good luck and welcome home!