Once upon a time I used to live in Bristol, which for those who don't know is an historical city about 150km due West of London. I spent 4 years in London and had a great time, but eventually the noise and the traffic and the sheer effort involved in getting anywhere begin to take their toll and I moved on. I'd been to Bristol when I did a 1 year post-grad business course at Bristol University when I left Oxford and had fallen in love with the place. Walking through the city centre you pass remnants of medieval walls, a 14th century church, huge red brick warehouses from the Industrial Revolution and catch glimpses of Isambard Kingdom Brunel's famous Clifton Suspension Bridge over the Avon Gorge. What's not to like? There's opera and world class theatre, a livly arts and music scene, a zoo, children's festivals, the annual balloon fiesta, plenty of wine and food and some of the best restaurants in the UK... and when you get on the bus the driver is likely to ask you, "Where's that to then, lover?" with a Bristolian burr. I love it.

I've been living in Australia for 3 years now (blimey!), and haven't been back to Bristol for two years, so I'm having a strange time of it now I'm here. I've been away long enough for there to have been major building projects completed that were only in the very early stages of demolition and clearance when I left, and yet in other ways I haven't been away for long enough for the smaller things to have changed. For example, Cabot Circus is finished and open and when I left it was mainly a huge headache for Bristol drivers who had to navigate lots of roadworks on a major route in order to skirt around the edge of a mammoth building site. 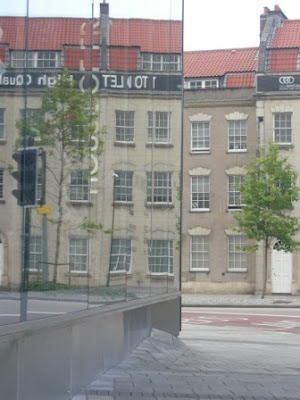 The development is a huge shopping complex that has revitalised a slightly seedy-looking part of town called Broadmead. Bristol was heavily bombed during WWII and the medieval centre was destroyed. In the brave new world of the 1960s Broadmead was turned into a purely commercial area with no residential accommodation, but by the 1990s it was failing, really, and the big stores had mostly moved to an out-of-town complex called The Mall on the edge of the motorway. Broadmead was full of second-string shops, the odd department store and a lot of empty buildings. And it wasn't pretty. 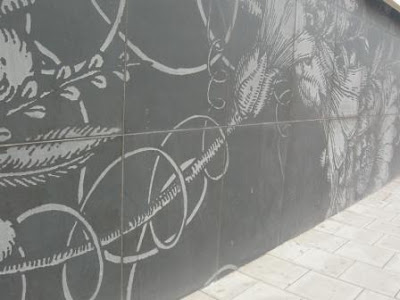 You could argue that Cabot Circus isn't pretty either, and I wonder what it will look like in 20 years' time, but for now it's quite a thrusting sort of development, covered in a paned roof to keep out the British weather.

The developers have at least tried to beautify the development... Walking along the outer walls on my way to the bus stop, and feeling a little disoriented because it didn't come out quite where I'd expected, I found the above wall of what looks like etched slate. The imagery comes from something like a medieval herbal and is based, I presume, on what would have been woodcut illustrations. Printmaking is everywhere! 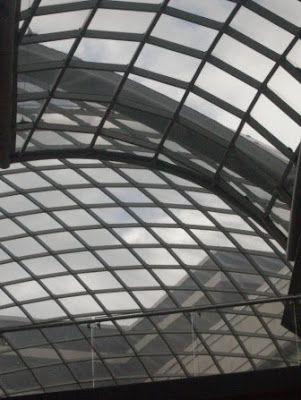 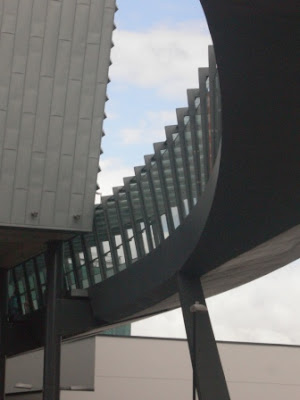 Do I like Cabot Circus? Hmmm, hard to say. It's difficult to navigate around and a bit brutal in its architecture so I'd say 'not really', at least in an aesthetic sense. What I really did like was the appearance of Harvey Nichols in Bristol! If you don't know the store, perhaps you remember Joanna Lumley forever meeting people for lunch at 'Harvey Nicks' in Absolutely Fabulous? It's synonymous with designer labels and ladies-who-lunch, and it's definitely NOT the sort of place I usually go into. However, despite appearances to the contrary I am a fashion fiend. Yes, I know, this does sound highly unlikely, but since my youth I have in fact read Vogue assiduously and lusted after certain designers. I even have a few choice pieces in my wardrobe, believe it or not, and I can certainly spot Moschino, Commes des Garcons or Dianne von Furstenburg at 100 paces. So it was delightful to spend half an hour in the designer ladieswear department at Harvey Nicks in Bristol with friendly, helpful assistants who didn't mind me drooling all over the clothes! Ahh, the enjoyment.

Anyway, I've had my fix now of Georgian houses, early Victorian terraces, small-but-imaginative front gardens, uneven pavements and lots of greenery, mixed with wonderful views from the hilly streets out over the Mendip hills or West towards Wales. There's been sunshine and scudding clouds in a brisk wind, and plenty of early Autumn leaves to kick through. It's been fun being in Bristol again.
Posted by Sara Bowen at 5:52 pm