You'd have laughed to see the set up I had for soaking the sugar lift off the final version of the plate - I ended up with the large black plastic trough full of water balanced on top of my wheelbarrow, out in the car port, so that I could wheel the trough into the light as it faded (and also to help my back by raising it up a bit while I brushed off the stop-out varnish). 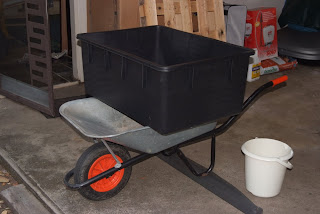 Etching it was fun and games. I put on a killer aquatint and... left it in the acid for too long and bit it all off again. Second time around I was more careful and it worked, and then I had to cover up the aquatinted areas to protect them while biting the rest of the plate so that the embossed areas stand out enough when printed. 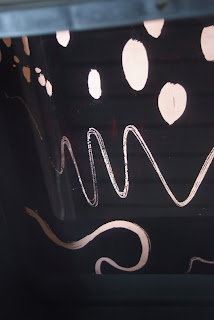 It looks a bit surreal, but this is the plate in the water as I finished brushing off the stop-out

Once etched - finally - it took a while to work out how to ink up the plate. I have to be very careful applying the ink so that it doesn't get into the areas that I want to appear as an embossed white-on-white texture on the print, which means careful application and removal of the ink. Having practised three-cloth wiping, I tried chalking the embossed areas and using tissue paper for a final polish-up of the plate surface to remove tone, and I think I've got there. It took half a dozen goes to produce a bon a tirer print, but I did it, dried it, packed it and couriered it off to Melbourne on Monday morning. 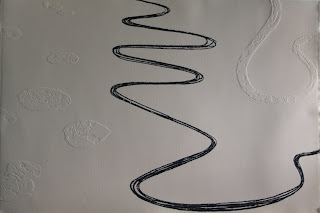 The final print - but this was taken before it was flattened so forgive the kinks in the paper!


I know it arrived safely so now all I have to do is wait to hear back whether it's been chosen or rejected. I must say that I have no high hopes of it being selected, partly because I have no idea of what other prints will be offered, but also because I can't seem to make any judgement about my own work. If I like it other people don't, and if I don't like it then other people do! Or at least, that's how it seems.
Posted by Sara Bowen at 8:49 pm

Looks really good Sara! What an achievement! Good luck - because that is really what it boils down to on the day of the selection.