Yes, at long last I feel well enough to put up some photos! I can't believe that two weeks after falling ill I'm still ill... mind you, the last few days of coughing have been down to the nuisance activities of one of our neighbours who appears to have decided to chop down and burn a number of trees in his back garden. Protected koala habitat? Fire ban? Permit required...? Nah, who cares about that?!

Anyway, a while ago I got on with making a saline etch solution and using it to make aluminium plates for my exchange project with Tina - so really this post should be on my Complicities blog, but anyway... I made up a sugar lift solution, dried it on the plate, used bituminous stopout to cover it, dried it again, washed it out in hot water and... realised that I'd need some sort of aquatint in order to retain ink in the open areas. Of course! Silly me.

Now I do have an aquatint box, but it's sitting in the carport still wrapped in corrugated card, just as it came off the container 18 months ago. I haven't re-instated it because I don't have anywhere suitably ventilated to put it. Somehow it doesn't seem fair to put it into the office/studio space that I share with Michael, at least not without equiping him with a P3 mask first. And it's a bit dodgy because we're in rented accommodation and I suspect there's fine print in the lease about using carcinogenic substances on the property! Fair enough. So I read up on techniques again and came up with spray-paint aquatint.

Here's my newly purchased can of black car enamel!


I was surprised at how easily this went on, although in retrospect I think I need to practice in order to get a finer mist on the plate. While I was waiting for the enamel to dry - less than 5 minutes in this climate, despite the humidity today - I made up the saline/copper sulphate solution. Then I coated the back of my plate with varnish to protect it and put the plate in to etch. Having read Aine's post about saline etch solution I was careful not to leave the plate in for too long, and anyway, having never used nitric and so not being used to my plate producing bubbles as it etched I was a bit wary of over-doing it. 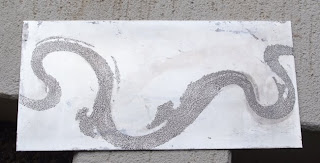 This is the result. I can't show you a close-up as the right lense wasn't on the camera

I think my spray was too coarse and I need to practice getting that right, but I was pleased that it wasn't more uneven and that there wasn't any undercutting of the individual dots of enamel while the plate was in the etching solution. 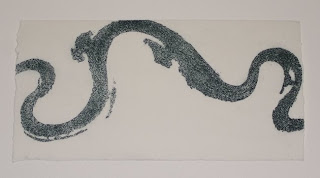 The third attempt at printing because I was a bit messy the first two goes!


As you can see, the aquatint is a bit coarse but I think I'll be able to rectify it. I understand it's fairly easy to re-aquatint a plate using the spray paint method; I'll have to see whether I have enough energy to re-spray this plate while I'm busy etching the others! But overall I'm pleased with the result.

Meanwhile I've also printed Tina's plates, which are decidedly more interesting than mine! These are the plates for January and February inked up using a surface roll so that I get an embossed texture from the more deeply-gouged areas. And the plates really are deeply gouged, using drills and built up areas of lacquer I think, judging from the bare plates. 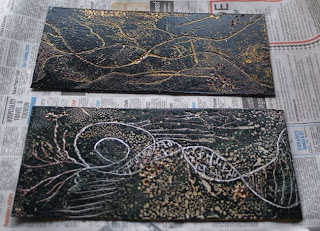 And these are the resulting prints. I need to change the size of the paper slightly; we'd agreed to print within the plate margins slightly and of course I forgot that the paper would swell while it was soaking... so to get the deckle edge I need tear the paper slightly smaller than the desired size to give it room to expand in the water. 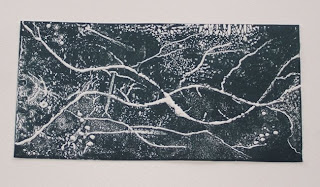 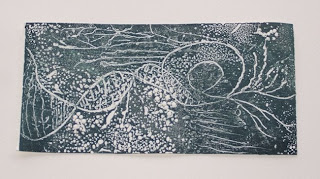